Nokia Lumia 920 The Best Smartphone in the World

Greetings !
Yesterday I was invited for a preview of new Windows Phone 8 models being launched by Nokia next week in India.  There are 2 models being launched   :
a) The Lumia 920
b) The Lumia 820
This post will focus on 920 as it is truly a mind blowing phone !
The event began with the Nokia representative gives some details of the Lumia Sales. Nokia has sold more than 100,000 Lumia units only during the 4 days of Diwali in November . That's pretty decent ! They also cracked the largest Corporate deal involving 4500 Lumia devices . Very Impressive . Makes me wonder about the crap dished out by experts saying that Lumia sales are very poor!  These experts can be really biased ! And they are biased against Windows Platform for sure!
Next we were given some hardware specs of the models . I have summarized some of these in this post below. We were told of various awards won by Nokia Lumia 920 . These have also been summarized below.
Pricing:
The indicative pricing of the models which will be released next week are:
Lumia 920 @ Rs. 37000/=
Lumia 820 @ Rs. 27000/=
Demos
We then saw some jaw dropping demos:
a) Camera quality vs. Samsung Galaxy  for night picture
No comparison here . Lumia was miles ahead
b) Optical Image Stabilization
The video shot with 920 was rock steady. The one with Samsung Galaxy was wobbly.
c) Nokia Lens by which one can remove unwanted objects from the picture.
d) Great Sound
Given below is the summary of the hardware specs
Specifications:
Lumia 920 has many things which are better or You don't have at all with iPhone 5 or Samsung Galaxy S3:
1. The best screen - 2.4x faster than Samsung S3's screen and 5.4x faster than iPhone 5's screen (tested with Lagom test). Super sensitive and bright screen that can be used with gloves or finger nails.  It's the first smartphone in the world to deliver a full 60 frames-per-second (FPS) without any blurring.
2. It has 3pcs HAAC (High Amplitude Audio Capture) microphones and so the recorded audio is distortion free also at the loudest music performances and it can record also very low bass sound vs its rivals has nonHAAC mics and so the recorded audio at music concert recordings is mostly distorted and they can't capture low bass sound.
3. Nokia Lumia 920 is the first smartphone which has pentaband LTE support.
4. Nokia Lumia 920 is the first smartphone with OIS (Optical Image Stabilization) system which makes it possible to get better photos in the low light and makes more stable videos. Floating-lens PureView camera with optical image stabilization
5. Nokia Lumia 920 is the first smartphone with integrated wireless charging.
6. WP8 is smooth, efficient and simple. MS Word & Excel seamlessly integrated.
7. Free Apps: City Lens, Nokia Drive, Nokia Maps, Nokia Music, Smartshoot etc. Augmented reality City Lens is very cool.
8. Aluminium cover of iPhone 5 and Samsung S3 gets broken easier than Lumia 920's polycarbonate cover - polycarbonate is used for example with bulletproof windows
9. Premium GPS that can be used also without internet!
10. NFC ( Near Field Communications)
11. Rich sound recording in vids
12. Wireless Purity Pro headphones
The awards:
Before that , lets see some images. First lets see the Windows UI vs. Apple UI . Clearly the Apple iPhone UI looks very tired as compared to super sleek LIVE Tiles of Microsoft. 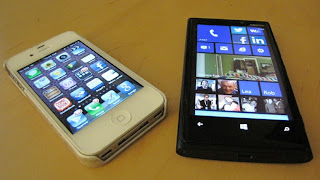 
Top rated product on Amazon based on Customer reviews


The Best High End Smartphones for the Holidays, CNET, USA

I am totally convinced that over next few months, Windows Phone 8 will keep gaining marketshare and in particular, the Lumia range will be a big Winner . Willing to bet ?
with warm regards

Suresh Ramani
www.TechGyan.com
Posted by Suresh at 4:11 AM

Suresh
Mumbai, Maharashtra, India
I am a Technology Consultant to Companies with expertise in Technologies like Cloud Services eg. Office365 , MS Exchange , Sharepoint , Virtualization .Details available on Company website at www.TechGyan.com Personally I also provide Consultancy to Societies in Mumbai who are planning Redevelopment . Details are available on my website at www.TDRMumbai.in